A six-year study by structural engineering professor Scott Ashford and graduate student Adam Young found that bluff erosion accounted for 68 percent of the fresh sand that nature provides to the county's eroding beaches. Young used laserscanning technology to generate a series of 3-D topographical maps that quantified coastal bluff erosion with a high degree of accuracy during the past six years. "While keeping in mind that six years is only a brief snapshot in the life of the Southern California coastline, our results call into question the conventional wisdom that coastal bluffs don't contribute much to the beaches," said Prof. Scott Ashford. "Adam's results should alert all groups interested in the preservation and development of Southern California's beaches that the assumptions they have been using to identify the supply of beach sand should now be re-examined." 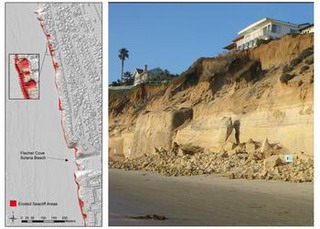