The Department of Structural Engineering is conducting research to develop advanced methods for the non-destructive structural monitoring of railroad tracks. The project is being funded by the National Science Foundation and the Department of Transportation/Federal Railroad Administration. San Diego Trolley, Inc. is also supporting the effort by providing access to its line for field tests and by exchanging technical information. The motivation for this project is the deteriorating condition of existing rail tracks due to aging and increasing train tonnage. The Federal Railroad Administration reports that the cost associated to structural failures of the track in the U.S. was as high as 302 million dollars in the decade 1992-2002 and 48 million dollars in the year 2001 alone.Current methods of rail track inspection use relatively old technology that is in need of major improvements. Main drawbacks of current inspections include the imperfect reliability of defect detection and the limited inspection speed. Operating rail testing speeds today are on the order of 20 mph in the U.S. and 40 mph in Europe.

Professor Lanza di Scalea and Ph.D. candidate John McNamara are investigating new ways to overcome some of the drawbacks of conventional rail testing. Methods under examination are based on ultrasonic and acoustic elastic waves that propagate in the track and interact with structural defects providing a means for flaw detection and characterization. Ways to probe the rail acoustically without requiring physical contact are being developed to increase the achievable speed. This involves the use of lasers and air-coupled microphones. A relatively new concept exploiting the vibrations propagating along the rail is being perfected. Such "long-range" method, pioneered by the Imperial College in London, has the potential for extremely high inspection speed only limited by the speed of sound in steel, on the order of thousands of mph. In addition, long-range waves are extremely sensitive to transverse-type defects, notoriously the most dangerous in rails (transverse defects are responsible for 20% of all reported track failures). On the long-range technique the NDE group is collaborating with the computational group led by Professor Krysl at the SE Department. John McNamara has developed signal processing algorithms able to enhance the effectiveness of the acoustic testing. He is now working on a Neural Network code for the automatic recognition and classification of the defects from the test data. The use of such artificial intelligence tool would limit, if not eliminate, the variability of human interpretation of the data. 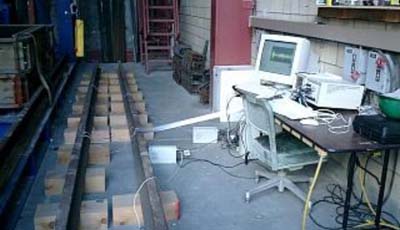 The ultimate goal of the research is to develop a reliable defect detection system that can be operated from regular passenger cars travelling at normal speeds. This would avoid the otherwise necessary traffic disruptions that are required with conventional rail inspection technologies. The results obtained to date from laboratory tests at UCSD and field tests at San Diego Trolley lines indicate the suitability of the long-range method for this task. Development work is ongoing to perfect the signal processing algorithms, train the neural network for defect recognition, and assemble a prototype inspection unit for demonstration tests. 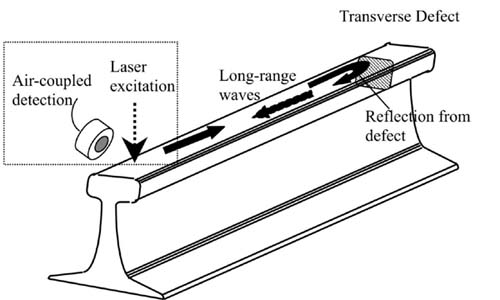 Salient results from this project can be found in an article co-authored by Lanza di Scalea and McNamara that recently appeared in the Special Issue on rail inspection of the journal Insight of the British Society for Nondestructive Testing. The article reference is "Ultrasonic NDE of Railroad Tracks: Air-coupled Cross-sectional Inspection and Long-range Inspection," Insight - Nondestructive Testing and Condition Monitoring, EURO Issue on NDT in the Rail Industry, Vol. 45, No. 6, June 2003, pp. 394-410.