Geosynthetic reinforced soil (GRS) bridge abutments are widely used in transportation infrastructure, and provide many advantages over traditional pile-supported bridge abutments, including lower cost, faster and easier construction, and smoother transition between the bridge beam and approach roadway. However, the adoption of this technology in areas with high seismicity like California is pending until their seismic deformation response is better understood. The objective of an ongoing study funded by Caltrans and a FHWA pooled fund project is to characterize the seismic response of GRS bridge abutments using both shake table tests and numerical simulations. A series of five shaking table tests were performed by Yewei Zheng and the Powell Laboratory staff to investigate the seismic deformation response of half-scale GRS bridge abutments. The tests permit evaluation of the effects of bridge load, reinforcement spacing and stiffness, and shaking direction, and results show that reinforcement spacing and stiffness have the most significant effects on the deformation response. Shaking in the longitudinal direction also resulted in considerable facing displacements in the transverse direction, which indicates the importance of considering threedimensional (3D) effects. The shaking table data is being used to validate 3D numerical simulations, which will be used to further understand the effects of different design details on the seismic deformation response of GRS bridge abutments that are needed to improve the seismic design guidelines for this type of structure. 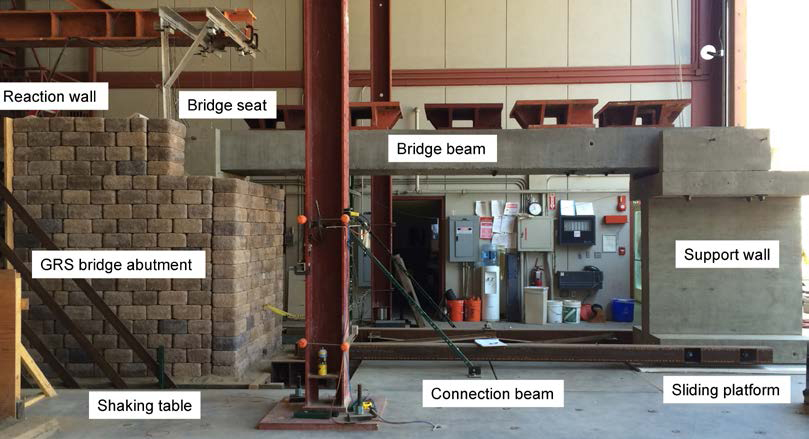