Stress wave mitigation in porous materials, such as silica monoliths and PTFE foams, are investigated. As shown in Figure 1, a hat-shaped setup on the SHPB testing system is used to induce force on the porous silica monoliths with di erent average pore sizes, from a few nanometers to a few hundreds of microns. Under the same shear rate and the same shear displacement, if the pore size is as large as 100 microns, the local softening caused by cell collapse will promote the formation of shear banding along the direction of shear force, and the in uence area encircled by orange line will be localized. Whereas if the pore size is small enough like tens of nanometers, local hardening ahead of the shear banding will happen, leading a large in uence area and thus more energy will be absorbed by the porous materials. 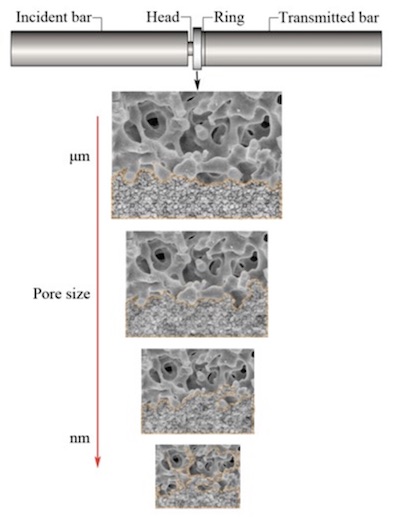