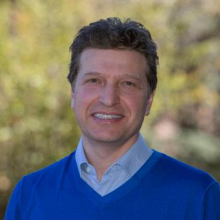 Dr. Tartakovsky is a Professor of Energy Science and Engineering at Stanford University. Prior to joining Stanford in 2015, he was a Professor in Mechanical and Aerospace Engineering at UCSD and, before that, a Technical Staff Member in the Theoretical Division at Los Alamos National Laboratory. His research areas include applied and computational mathematics, fluid mechanics, and biomedical modeling. Dr. Tartakovsky has co-authored more than 200 papers in leading journals in several fields.

Neural networks (NNs) have become ubiquitous in scientific computing, including qualitative predictions of subsurface phenomena. Yet, the question of what they are good for remains unresolved. We discuss several where NNs might offer advantages over the existing alternatives. One is the use of NNs as surrogates or emulators of partial differential equations (PDEs) that describe the dynamics of complex systems. A virtually negligible computational cost of such surrogates renders them an attractive tool for ensemble-based computation, which requires a large number of repeated PDE solves. Since the latter are also needed to generate sufficient data for NN training, the usefulness of NN-based surrogates hinges on the balance between the training cost and the computational gain stemming from their deployment. We rely on multi-fidelity simulations to reduce the cost of data generation for subsequent training of a deep convolutional NN (CNN) using transfer learning. High- and low-fidelity images are generated by solving PDEs on fine and coarse meshes, respectively. We use theoretical results for multilevel Monte Carlo to guide our choice of the numbers of images of each kind. We demonstrate the performance of this multi-fidelity training strategy on the problem of estimation of the distribution of a quantity of interest, whose dynamics is governed by a system of nonlinear PDEs (parabolic PDEs of multi-phase flow in heterogeneous porous media) with uncertain/random parameters. Our numerical experiments demonstrate that a mixture of a comparatively large number of low-fidelity data and smaller numbers of high- and low-fidelity data provides an optimal balance of computational speed-up and prediction accuracy. The former is reported relative to both CNN training on high-fidelity images only and Monte Carlo solution of the PDEs. The latter is expressed in terms of both the Wasserstein distance and the Kullback-Leibler divergence.